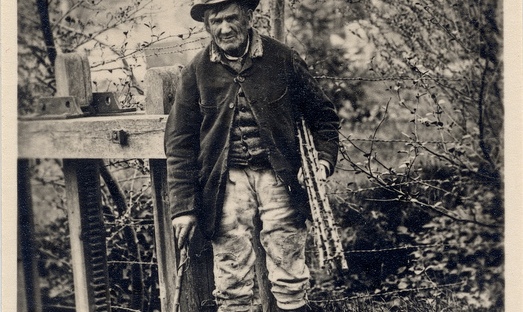 A few months ago, I published an article to try and examine what could be the origin of the word « shillelagh », which is the subject of many different theories. I wanted to expand a little bit more on this subject by examining the other words that are commonly, or at least historically, associated with the Irish stick. I will talk here about cipín, bata, cleith ailpin, wattle and a few others. Thank you once again to Dónall Ṡeáin Ó Duḃġaıl for the help in translating.

Before going into the rest of the vocabulary used for our sticks, I want to add another interesting tidbit to my previous article. Let’s look at another source, this one from well known Irish author William Carleton, in his book « Tales of Ireland », published in 1834. This excerpt comes from the story « Lachlin Murray and the blessed candle », where the titular character picks a stick fight with… well… none other than St. Patrick himself!

It’s interesting here that Lachlin’s stick is made of hazel, while he says that St. Patrick’s crosier is not a shillelagh, but is made of shillelagh (i.e. oak).This is an interesting use of the word that seems to largely agree with the idea that the expression « shillelagh » comes from the name of the forest. There have been theories brought forward, to explain why Carleton used this word, on how this was an attempt by the author to modify his language to fit English ideas, but I can’t see anything that would support that in his writings. Which brings me to my next point.

I have read authors referring to shillelagh as being a purely Anglo- or at least foreign- invention, and a term that was not really used by the Irish majority, or at least by faction fighters. It’s an interesting theory, and one which is difficult to verify as actual faction fighters left very few written testimonies. It makes no doubt that the term shillelagh could have been used differently in various places, but I have yet to see any source that would confirm the Anglo expression theory, and quite a few that seem to actually indicate that shillelagh was a well established name for cudgels in Ireland. Among them, two stand out.

The first, we already talked about, is Carleton. Carleton lived during the height of faction fights, and claimed to have been instructed in bataireacht himself. In his writings, he uses the name shillelagh quite profusely, and though he shows no timidity in complaining about early tourist versions of the weapon, he never dismisses the word as improper or foreign.

The second is Patrick Weston Joyce, or P.W. Joyce, a well known Irish historian and etymologist. In 1910, around the end of his life, Joyce published English as We Speak it in Ireland which contains many expressions I will explore in this article. Joyce grew up in the 19th century, and describes how he witnessed many faction fights when he grew up around Cork. More to the point, here is what he wrote about the word shillelagh.

So it does seem that the word was sometimes associated to oak cudgels specifically, but looking elsewhere we see that the term also became a general one for fighting sticks. Now, it seems fairly clear that the word does not stem from an older Irish word or combination of them, but similarly it is not quite an English word either, apart from the way Shillelagh gets spelled out most of the time. Síol Éalaigh is a name as Gaelic as can be, with an origin that is still murky – at least as far as the cudgel is concerned-but one which seems solidly supported by historical sources.

Now, that we went completely around the word shillelagh, let’s continue, as promised, with the other Irish expressions used to talk about the weapon. A particularly useful source for this article were court records, often published in newspapers of the time. The great thing with these is that they are usually verbatims, while many other sources get passed through the filter of the author. We can then see the words used by working class Irish people to describe things as they were recorded. On the other hand, these sources are only as good as the ability of the transcriber to understand the words, and some may be misunderstood or may not turn up in a search. Still, quite a few examples came out of this research.

Another word that we see used today is bata, which stands quite simply for « stick ». Interestingly, I have yet to see this word mentionned on it’s own to talk about a shillelagh. It is used in bataireacht, bata fear (stick man) or bataire (stick fighter), bata mór or mórbhata (a great stick, as in Hercules’ stick) but I would guess that bata itself is probably too general a word. Just like stick is in English, bata could refer to just any kind of stick, and not necessarily a weapon. So while it is quite correct to use it today, it does not seem like it was a popular name for a fighting club in the past.

This is another word that turns up rarely in mentions of shillelaghs, probably for the same reasons as bata. It is another fairly generic term for a stick, and will also usually turn up accompanied by another word. For example, Maide láimhe mór for a staff (literally, big hand stick; more on that later), maide fada ceathrú for a long quarter staff, maide cam for a crooked stick or Buaille maide for a striking stick. It also shows up in another word for bataireacht which is nó ag imirt ar mhaidí (stickplay).

All of these examples I have found mostly in dictionaries, as it turned out in almost no court records or stories. This might be due to the pronunciation of the word, which is quite different from how one would pronounce it in English, but if it was I saw no trace of it so far.

This one is not well known today, but was quite popular in the 19th century, judging by the number of times it is mentioned in court records by bataires. It might have risen in popularity following a court case in 1842, where John Foster was acting as judge. One of the defender explained that he used a cleith ailpín on his alleged victim’s head. The judge went on to say that he had heard enough, and that the man was a true gentleman as he wiped the victim’s head with a « clean napkin ». Hilarity ensued, and it was quickly explained to the judge that the defender was actually talking about a club.

Cleith here stands for « pole » and ailpín usually means « knob ». Cleith is used sometimes by itself, but more commonly along with ailpín.

Save for the obvious presence of a knob for cleith ailpín, there is no indication that the expression was reserved for any particular type of stick.

Often anglicized as kippeen, this term seems to have a bit more specificity behind it. It is usually understood today to designate a short stick, and this is not incorrect, but historically, while the word had a « small » connotation to it, was not necessarily referring to length. In fact, the word can still be used today to talk about small pieces of wood used to start a fire, and is quite close in that way to the word « kindling ». Cipín is used to talk about short, thin or light sticks. So both a very thin, or very short sticks could be considered cipíns in their own rights. The term comes around quite a few time in court records when trying to describe if the stick used was large and fearsome, or small and discreet. It seems to always have be used on its own.

This word is a bit of an enigma. While the Irish used plenty of English terms to talk about their sticks (cudgels, clubs, etc) this popular term seems English at first sight, but held a slightly different meaning than in England. Wattle is somewhat the opposite of cipín, though not always. It seems to refer to a « big stick », and much like cipín, this can mean many things to different people. Some witnesses used it to describe a stick big enough to be a dangerous weapon (Northern Whig, 7th Aug 1883) , others a stick big enough to necessitate two hands to wield (Southern Reporter and Cork Commercial Courier, 16th Aug 1825). Some use it to describe a stick with a knob (London Evening Standard, 7th Sep 1846). Others talk about « small wattles », or one handed wattles (Southern Reporter and Cork Commercial Courier, 8th Aug 1840) so using word to simply mean « stick », but those are rare occurrences. Overall, it wouldn’t be incorrect to use it to talk about a long- or at least imposing- stick.

In English sources, the term is usually reserved for long pieces of wood used to make fences or other crafts, specific types of trees (like the Australian wattle) and rarely if ever is it used to talk about fighting sticks. Is it a case of the Irish adopting an English term and using it in their own way, or is it faulty transcription of some other Irish word? Hard to say at this point as I couldn’t find any equivalent word in Irish.

This is another curious entry, and one I only found in a few dictionaries. The strangest thing is that this word is used to refer as well to a partridge bird, the modern patraisc. I could not find out why these two words came to be associated in this way, although a clue may lie in this article from the Belfast Telegraph, 18th November 1876, where a shillelagh maker from county Antrim named Johnny Shannon calls the thorns of a blackthorn « feathers ». Possibly as a metaphor as how a bird get’s plucked when prepared as a meal, since those thorns were removed when making a shillelagh? It could also very well be some rare regional expression, or a mistake by O’Reilly, as it shows nowhere else but in his dictionary.

This expression stands simply for « club » and gets used in an alternative name for bataireacht, caoirleacth (fighting with sticks) and shows up in Lhuyd’s dictionary. In 1701, Lhuyd considered the expression to have mostly disappeared, though O’reilly apparently found it suspect, and shared his skepticism with Lhuyd. Whatever the source of the expression, it is safe to say that it was not in use by the 18th century.

I hope this little article was of interest, and cleared up some notions about the other names that can be used to designate the Irish stick. Let me know if you ever heard of any other one!